In a period of rapid change when villages are growing fast, the activities of the Heritage Knights can contribute to a greater awareness of the distinctiveness of the places where we live and contribute to future strategic planning and policy making.

The village of Norton-Juxta-Kempsey is a rapidly expanding village on the edge of Wychavon not far from the city of Worcester, it is fighting hard to maintain its distinctiveness.

Preparations for a Heritage Quest in St.James Church in Norton. 2012.

1. Local volunteers worked with the Heritage Knights to put on a timeline all the information they could find about their parish over the centuries.

They discovered why the village is known as Norton-juxta-Kempsey rather than Norton-juxta-Worcester as would seem more appropriate today; for centuries Norton was a small part of the Bishop's Manor of Kempsey! Many of the records they were looking for had to be extracted from the Kempsey records of the Bishops of Worcester now kept in The Hive in Worcester. They also discovered that until the 19th century their church had been a Chapel of Ease to Kempsey Church, the Dean and Chapter of Worcester Cathedral had been Patrons since the Reformation so they needed to cosnult the records held in the library of Worcester Cathedral.

Kemspey is an ancient Christian site down by the River Severn, the Bishops of Worcester had owned land in the area from time immemorial.

For centuries the people who lived in Norton had to carry the coffins of their dead across the fields to bury them in Kempsey! One volunteer was working in the Library of Worcester Cathedral and discovered a 16th centuy letter written by the Lord of the Manor of Woodhall to the Bishop of Worcester requesting that Norton had its own burial ground, this was granted and Norton people have been buried in the churchyard ever since.

Ron shared his enormous collection of old photographs, we made him a Heritage Knight!

3. Others explored the church and parish looking for things that could connect the stories with what can be seen today.

4. Others made clues for heritage detectives

The clues were put into the Treasures box that mysteriously appeared in the school.

5. When all was ready. Pupils from Norton First School were heritage detectives for a day and explored their local church.

The children found a mysterious box in their school hall.  Inside were old photographs, maps and documents and a request for help. Did these documents come from the parish of Norton?

The children went to their parish church to find out more about their parish and its story over the centuries.

The children discovered that their church building held many stories in its stones; they were able to piece together elements of the story of Norton, and complete their parish timeline. They were able to file a report for Arthur telling him that he might recognise parts of their ancient church building. Then they celebrated. Find out more... 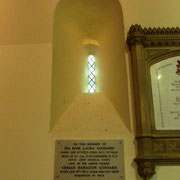 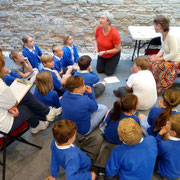 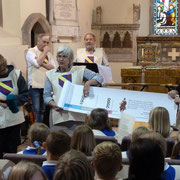 You too can discover the story of Norton juxta-Kempsey.  Go to the Quest Bank and download one of the three Norton Community Quest.