Scroll to the bottom of the page for background notes and further information.

To discover why over the centuries people have given money and land to the church.

To learn about and use wonder point and wonder cards

For some to make wonder cards

To help heritage detectives  spot, wonder, find out and make connections. Write their own account.

To learn to make wonder cards

Paper to draw on

Completed wonder cards of memorials, could be gravestone/windows etc

To make a wonder card.

In the treasure’s box the children find a torn piece of Mrs Steven’s will with a note that asks the question "Who is this Mrs Stephens, where did she live and why did she leave money to the church? Also They find similar notes about George Walker and Mary Beechill  plus snippets of information about the uses of money left for the poor of the parish.

INTRODUCTION The heritage detectives as a group talk about the material they have found in the treasure's box. The leader introduces a wonder card for Mrs Stevens, they go and look for the associated memorial.  Then they begin their quest tasks.

QUESTING TASK ONE Each pair of heritage detectives is given the front of a wonder card.  The card carries an image of a memorial that can be found in the church. Their task is to find the matching memorial and read and record what they can read on the memorial. They are given binoculars to assist with this task.

When they have recorded the information they must  find the back of their wonder card from a selection in the information library.  Then they can work out how their character contributed to the life of the church in their time.  The wonder card can be put on the timeline, 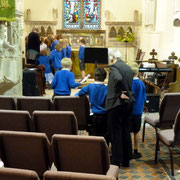 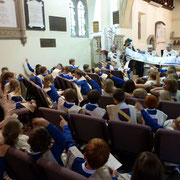 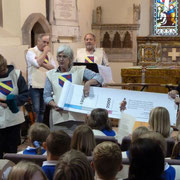 QUESTING TASK TWO  Those who finish tier task with time available can make their own wonder cards from memorials They will need to discover a wonder point,examine it, record it, make an image find out more from the information library and create their own completed card to put on the timeline.

All detectives are aware of wonder points

Know about the need to find out more

Know what changes a wonder point into a wonder card

Can put wonder cards on timelines

This workshop looks at the historic relationship between the people and their parish church. Before the Reformation of the 16th century everyone living in the parish would be expected to attend their parish church for mass Sunday by Sunday throughout the year and during the week as well if their was a special festival or Holy day.  The church was frequently a long walk away for many,  if they were lucky a patron of the church would have built a Chapel of Ease so that those living at a distance would not have so far to go for services.  But for  festivals, weddings and funerals it was necessary to travel to the parish church, whatever the distance.  In the early days, before they became parishes in their own right, Stoulton and Norton were distant parts of the great parish of Kempsey, both communities had their own Chapels of Ease but it wasn't until 1565 that they had the right to bury their dead locally. The people of Drakes Broughton, part of the parish of Holy Cross, had to wait until the middle of the 19th century for their own chapel. iImagine carrying a coffin all the way to Kempsey or Pershore.  Coffin bearers were allowed to carry a coffin on the shortest route, e.g. across the fields, coffins were heavy and the bearers could only put down their burdens at special resting places where there was a cross, or in the lych gate of the church.

Across the centuries it has been important to know the boundaries of the parish where one lived;, only your parish would help if you fell on hard time! Beating the bounds of the parish was an important ceremony to reinforce a knowledge of the parish boundaries, especially for small children who sometimes had their heads bashed against the boundary stones to reinforce the message.  After the Reformation Queen Elizabeth1 kept very few pre reformation ceremonies but beating the bounds was one of them.  For her administration despite all the changes, parishes already set up and functioning presented the best way to administer 'all the new policies and procedures she was introducing, including the registration of births, deaths and marriages.  Indeed until the Local Government Act of the 19th century the 'vestry of the parish church was where parish officials were elected and held their meetings.  Although it became increasingly possible to 'opt out' of worship in the parish church there were disadvantages for those who did who were not eligible to vole or stand for stand for office even a University education was denied a nonconformist. All that was to change in the 19th century and  through the 20th and the 21st century as the state became increasingly secular

so the role of the church in administering the local parish has deceased.

The practice of donating/leaving money to the church has been common over the centuries.  Benefactors boards, once a common sight on the church wall have largely disappeared but even a cursory examination of the archives will give local examples of huge generosity on the part of individuals in a community Christian in its ethos and mindful of the need to care for the poor and oppressed. Often these people are commemorated in some way in the memorials on church walls or in the churchyard.  Examples like that of Mrs Stevens in Norton church make an ideal focus for the investigations of heritage detectives.

The Parish Church was a focus for community life. Historically it has

Looked after the practical needs of parishioners - poor relief was once a local concern and you had to live in the parish to get it.

Looked after legal needs of parishioners

Registration of births deaths and marriages - People already visited the church for their baptisms,

After the reformation Elizabeth ket the parish structure to keep this administration intact.

Looked after the social needs of parishioners

For hundreds of years everybody in the parish had to come to church on a Sunday, it was the place where they met their friends, shared gossip, had fun and games

Looked after the spiritual needs of parishioners

Baptism in the font.  Christian teaching - early schools, bibles, what the children had to learn

In charge of it all - the Parish Priest.